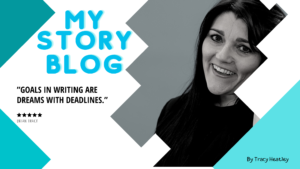 From a teenage mum to showing people how it’s done!  A mother’s motivation – where is tall began!

As I sit ready to start the first my story blog, and think and about where it all began, my first thought is of me stood nervously in the kitchen of my family home,  reassuring my mum that my life wasn’t over.  I can visualise myself explaining to her that just because I was a pregnant teenager, my life wasn’t over. Telling her that I knew my life would change, but I was prepared for that.

Imagine that feeling of dread as I explained to my parents that I was having a baby in a few months time.  It amazed me how, because I was young, other people, including family, were devastated as they predicted the life that they were sure I was destined for. Well, I had other plans!

At six months pregnant there was a major turning point! I vividly remember, sitting on a bench, in Manchester Arndale, and all I could see was young pregnant women, some of them barely old enough to be out of school.  I, on the other hand, was now an adult, at the ripe old age of eighteen.  All I could see that day was pregnant girls and women everywhere I went.I now know this to be what psychologists refer to as the ‘Baader-Meinhof‘ phenomenon.  Commonly known as a ‘frequency illusion’.

Whilst I always do my best not to judge other people, that day, I just couldn’t help it.  Most of the women and girls I saw looked tired, unhappy and suffered a distinct lack of self care.   Is that what I would become? As the knot grew in my stomach and the horror escaped through my gasp, I promptly stamped my foot, and thought oh, no, not I!  Don’t worry, I didn’t break out into song! Gloria Gaynor’s career was perfectly safe!

The Making Of Me…

Surprisingly to most, my unexpected pregnancy and the birth to my beautiful baby boy was the making of me.  Being a mother brought out the best in me and defined me as the strong resilient woman I am today. Who knew that little bundle of joy who caused so much distress and turmoil for my parents, turned out to be the best thing that ever happened to me?  I know this to be true, because when my son was just six weeks old, my mum told me so!  My mum, the doting grandma, who has loved her grandson dearly from the moment he was born. 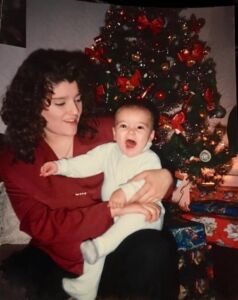 A few months on,  and the front door slammed closed with a loud bang, as a large number of bin bags were loaded into a van. That was that!  My son was left with no father to raise him and I became a single mum statistic.  Were the doom mongers and energy zappers right?  Was I destined for a life of hardship and unhappiness?  As I sat bewildered and bereft that knot appeared in my stomach once more.  I rose to my feet, put my head up, shoulders back, stamped my foot and thought oh, no, no I! Yes, there’s a pattern emerging here! 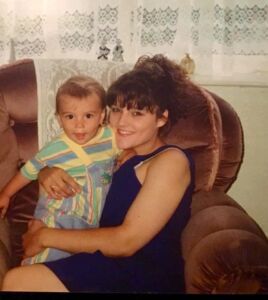 Some months later, I was living on a council estate, in Salford, Manchester.  A far cry from the suburban semi I’d grown up in.  I was raising my son well and working hard, even though I’d have been financially better off claiming benefits.  Unable to grasp how that could be possible, but it was.  I remember being £40 worse off each week, because of rent and Poll Tax to pay. Nevertheless,  I was thinking long-term and I knew that being employed was the way to succeed.

Don’t get me wrong, the benefits system we have here in the UK was my lifeline when that door slammed closed, but for me that was, and only ever would be, temporary.  I just needed to get back on my feet.   Metaphorically, speaking of course!   I would stubbornly stamp my foot many times over the years to follow, but that stubbornness literally stood me in good stead!

I was wealthy with love and strong with determination, but I was skint!  Penny less and poor to the point where I would often hide behind the sofa, when the milkman came knocking, because I couldn’t pay him. I would often be found eating one Weetabix, with a tiny amount of milk, three times a day, because I simply couldn’t afford to feed both me and my son,  Like any loving mother my boy came first.

It wasn’t easy, but I wouldn’t change a thing! Never in my wildest dreams would I have imagined running my own business.  I was raised to go to school and get a job, and they didn’t teach entrepreneurial skills at my school.

As my son was starting school, I knew it was time to move on.  I was desperate to raise him in a village environment, with a country setting and quieter life.  Despite the reservations of others who were genuinely concerned for our welfare.  I quit my job, packed up and moved on.  Even though I didn’t know a single soul, when he was four years old, my son and I settled into our new Rossendale home, and the rest is history.  I’ve been here ever since!

Back to school for me!  When I was young, I’d lost count of the amount of times I was told, you’re wasting your brain; you have no idea how intelligent your are!  Turns out those teachers were right.  After relocating and getting a ‘good’ job, I decided to go back to school!

I wanted a degree, so I was jolly well going to get one!  With a part-time job, working in PR, to pay the mortgage, I embarked on higher education. Turns out I loved to learn and I developed a passion for personal growth and self improvement.  Something I’m still passionate about to this day.  To sum it up in a nutshell, I was still skint, but a scholar!  There’s nothing like a mother’s motivation to help you reach your goals!

Gaps In The Market

The small PR agency I worked for was based in a business centre, made up of lots of micro businesses providing an array of services or selling products that they truly believed it.   This was my first experience working for a small company, and I was amazed at how many gaps in the market there were that needed filling.

Effectively, they needed all the departments that a larger business had, but they lacked the human resources, time and often financial resources to fill those gaps, and that’s what sparked my first business idea, which I’ll tell you all about another day!

And that’s where it all began!

I hope you enjoyed sharing some of my mother’s motivation, my background and my journey 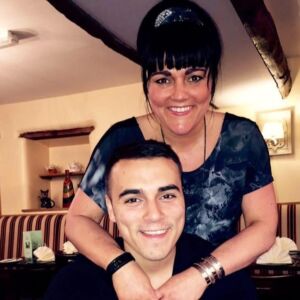 4678Views
We use cookies on our website to give you the most relevant experience by remembering your preferences and repeat visits. By clicking “Accept”, you consent to the use of ALL the cookies.
Cookie settingsACCEPT
Manage consent

This website uses cookies to improve your experience while you navigate through the website. Out of these, the cookies that are categorized as necessary are stored on your browser as they are essential for the working of basic functionalities of the website. We also use third-party cookies that help us analyze and understand how you use this website. These cookies will be stored in your browser only with your consent. You also have the option to opt-out of these cookies. But opting out of some of these cookies may affect your browsing experience.
Necessary Always Enabled
Necessary cookies are absolutely essential for the website to function properly. These cookies ensure basic functionalities and security features of the website, anonymously.
Functional
Functional cookies help to perform certain functionalities like sharing the content of the website on social media platforms, collect feedbacks, and other third-party features.
Performance
Performance cookies are used to understand and analyze the key performance indexes of the website which helps in delivering a better user experience for the visitors.
Analytics
Analytical cookies are used to understand how visitors interact with the website. These cookies help provide information on metrics the number of visitors, bounce rate, traffic source, etc.
Advertisement
Advertisement cookies are used to provide visitors with relevant ads and marketing campaigns. These cookies track visitors across websites and collect information to provide customized ads.
Others
Other uncategorized cookies are those that are being analyzed and have not been classified into a category as yet.
SAVE & ACCEPT
Login
Lost Your Password?